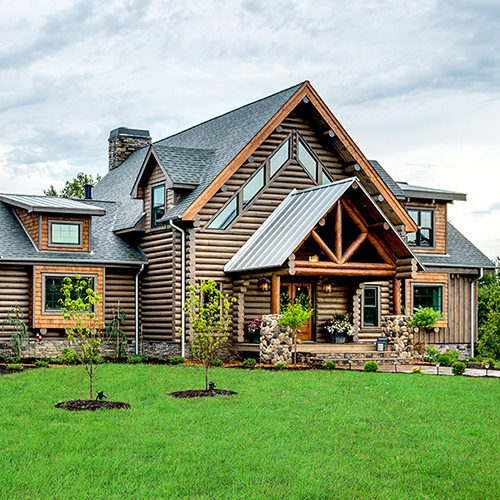 It’s been almost a century since the tiny Appalachian community of White Oak Flats evolved into Gatlinburg, one of the most popular vacation destinations in the United States. First settled in the 1830s, early residents were attracted to the area for many of the same reasons that tourists are today – lush summers, brilliant autumns, snow-blanketed winters, colorful springs and, of course, the majesty of the Great Smoky Mountains.

That’s why Danny and Tia Suiter wanted a mountain home of their own.

In 2015 the couple purchased a 34-year-old long-leaf pine cabin on one of Gatlinburg’s highest peaks.

The cabin, locally known as Cloud 9, had sat abandoned for three years before she and Danny rescued and restored it. “It was a long and very hard year of remodeling, but we reopened it for vacationers to rent and for our own family’s use,” she added.

Ten months after completion, Cloud 9 was one of the 2,460 structures engulfed by the November 2016 wildfires that also took 14 lives and caused $500 million in damage.

Stunned, the Suiters were not quite sure what they wanted to do with the bare concrete slab on their scorched lot. New cabins, homes and chalets were emerging from the ashes all around them, but it was not until city officials and rental companies began getting questions from past visitors about whether Cloud 9 would be rebuilt that the Suiters wholeheartedly committed to the project.

“Lots of people had gotten married at Cloud 9, shared gatherings there, made memories there,” Tia said. “It was devastating to so many visitors to lose the warm colors and the rich presence of beautiful wood that was felt by all. It seemed this cabin was irreplaceable. Or was it?”

The endeavor seemed overwhelming, but Danny and Tia decided that even though they could not bring back the home that held so many memories for those who had rented it for vacations, reunions, honeymoons or retreats over the years, they would recreate Cloud 9 as best they could.

The Suiters were wary of the influx of contractors who swarmed the mountainside after the fires.

“In choosing a log home company, for us quality was a must, longevity was a must and honesty was a must, especially when something has personal value like this property did,”Tia stated. “Our search ended when we found Honest Abe Log Homes. Their reputation separated them from all others.”

“As soon as construction started, it was the talk of the mountain,” Tia said.

The ground floor was designed for entertainment with its movie theater, den, pool room, a pub with a wet bar and three private bedroom suites.

In addition to two master suites with private decks, the second level has two living rooms with natural stone fireplaces, an indoor dining area that seats 14, a gourmet kitchen complete with a wine refrigerator and an outdoor dining space for six alongside a gas grill. Floor-to-ceiling windows and vaulted ceilings fill the home with natural light and showcase the sweeping mountain views.

The third-floor loft, called The Bear’s Den, has a grand cathedral ceiling, and double glass sliding doors lead to a private deck.

The house comfortably accommodates 18 visitors with six bedrooms on three levels. Each room has a patio or deck with views of Mount LeConte, Anakeesta, Ober Gatlinburg, Ski Mountain, Clingman’s Dome or the lights of the city.

To complement the interior amenities, there are several outdoor living spaces, including a luxurious eight-person outdoor jacuzzi and a furnished covered patio with a television mounted over a wood-burning fireplace of real mountain river stone under a cathedral ceiling.

The Suiter family congregates at Cloud 9 for family retreats, but the cabin is so popular that Tia says it’s hard to schedule around visitors. She understands, however.

“There are things in life we treasure and hold close to our hearts,”Tia observed. “Family memories during childhood years are definitely among them. We are so happy to have that place for family and the many who visit Cloud 9 each year.”